The fourth stop of the Sky Runner World Series at Sierre-Zinal turned into a fantastic duel between familiar foes.  Sierre-Zinal results tell us a lot about mountain running, especially from an American perspective.  First, however, the race itself:

Here at Inside Trail we were spot-on with the men’s winner of the Race of the Five 4000m although we had Kilian Jornet running mano-a-mano with the victorious Marco De Gespari instead of the other usual suspect.  Indeed it was the man from Martigny, Cesar Costa, who repeated his 2nd from 2010.  Certainly this is a great result of consistency for the young Costa.  The three runners stayed away early only to see Costa and De Gespari gradually separate from the

Catalan.  In second at Weishorn, De Gespari made his definitive move and over the final 11 kilometers left little chance for Costa, as the two leaders made their final descent into Zinal.  In the end, Jornet was nearly 4 minutes in a-rears, and Costa about a minute behind as the victorious Italian improved his best at Sierre-Zinal to 2:30:18, again flirting with Jonathan Wyatt’s course record of 2:29:12, and confirming “his 2008 coronation.”  Luis Hernandez and Juan Pablo Rangal round-out the top 5.

Our two prominent American women had a very good day.  Despite not finding the top spot like she did a year ago, Megan Lund-Lizotte has to feel satisfied with a super solid 4th only six minutes back.  Brandy Erholtz finished a very respectable 14th.  Unfortunately, Megan Kimmel did not make the trip as had been reported.  The women’s podium was the result of an equally contested battle.  Like the men’s race, the winner, Oihana Kortazar, trailed early on.  Sitting comfortably behind France’s Aline Camboulive and Lund-Lizotte, Kortazar made her move mid-race and cruised to a nearly two-minute win over Camboulive in 2nd and France’s Celine Lafaye in 3rd.  Lund-Lizzote and the young promising Russian Zhanna Vokueva complete the top-five.

The crowds enjoying the festive 2011 Sierre-Zinal race watched 3,315 participants from 20 countries, which is the most the race has had in its 38-year history.  Reports circulating print media and some email and You Tube videos suggest Sierre-Zinal again was a grand occasion for competitive and difficult racing along with an electric post-race atmosphere that’s carried runners and spectators along in this annual parade of mountain running pageantry.  Look for Inside Trail next year to be enveloped in the elegant chaos that appears to be Sierre-Zinal.

So, what do we take from the happenings at 2011 Sierre-Zinal?  First of all, we have not congratulated the handful of American runners that made the trip to run this epic 31k alpine up-and-down.  Glen Randall finished a terrific 8th at 2:45:34.  Based-on his video interview provided by Runcolo.com via Nick Clark (there’s a slew of video over there), he has a genuine interest in running despite his seemingly serious competitive skiing commitment.  This is good news for us mountain running fans as the winner of the 2010 Pikes Peak Ascent, in an astounding rookie 2:09:xx, has plans to run and compete.  Randall looks like he has the goods to be a real fixture and representative on the American mountain running scene (and hopefully competing for us in team competition).

Otherwise, aside from the remarkable 17th place by ultra regular Dakota Jones, who ran 2:53:17, our mountain specialists got a case of the not-this-years.  Joe Gray was injured.  That seemed to surprise even the interviewer of his video.  And Max King had a cold (but still registered 2oth).  That left it to the three ultrateers to get out there on that unruly ascent and show the short course specialists how it’s done.   Clark  took 36th, and Scott Jaime 64th.  Looks  like a nice start to a little UTMB prep.

Indeed, Dakota’s 17th and beating Max King has to be quite a shock (that he beat King or that King raced ill).  We intend to watch the Americans and the sky running scene very closely as they work towards the world mountain running championships in Albania on September 11.  Let’s hope someone is putting Randall on a plane, in shoes, and at the starting line on 9/11.  He’s our ringer.  He was very ambivalent on whether he would try to defend his 2010 Pikes Ascent crown next weekend.  Pikes happens to be the 5th stop on the Sky Running World Series.  Unfortunately, we don’t suspect we’ll see any of the big international contenders competing at Pikes. 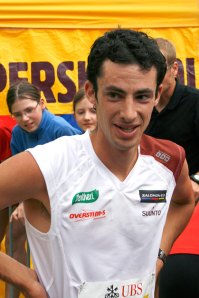 As for a little international perspective, Inside Trail promises that you will become much more familiar with these runners, these incredible ascent assassins.  Most of us already know Kilian Jornet.  Do we chalk-up today as an upset?  Say something really incisive like some days are better than others?  What if one was to suggest that Kilian might be undermining his own cause?  Crazy?  Overreaction?  What exactly is Kilian’s cause?  An interview with Jonathan Wyatt characterizes a time when he was asked when Kilian will see his running prime (Wyatt was asked the same question and answered unequivocally that it was 2004.  He was 32 and aside from his insane mountain running exploits, he finished 20th in the marathon at the Olympics that year).  He said a prime might be a tough call with Kilian because he’s doing so much mileage at such a young age.  He went on to say he’d probably have some good years of fitness, and then perhaps some not so good, but it depends on what he’s focusing on.  That seems a huge point in the type of running that we see at Sierre-Zinal (or any competitive running for that matter).  The American boys described their attempts to run up the initial ascent here at Sierre-Zinal, and there were international guys hiking past them.  It was astounding, according to these American ultra runners.

Like anything, one needs tremendous focus to be successful, especially at the international level.  Nick Clark’s interview we posted here at Inside Trail a few days ago touches on this very point of training.  What is Kilian’s focus?  He’s been successful certainly these last few years, but is his determination on running longer races going to affect his more immediate skyrunning results, and might there be anything long-term to the “kid” logging so many miles?   Here in the U.S., our sort of infatuation with ultra running has made Kilian a super hero (will we one day mean something else when we talk about the Catalan’s “descending skills”).  We hope Kilian and the U.S. mountain running teams a long streak of success.  So, let’s get focused and healthy for the next set of intense competitions.

12 thoughts on “2011 Sierre-Zinal Results and Commentary”