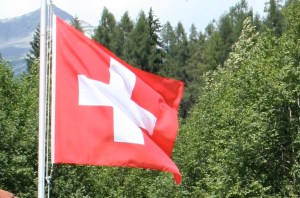 What is the perfect mountain running race?  How about we start that discussion right here and now while I tell us about one particular race that’s been blowing people’s minds for over 30 years.  For those scoring at home, I guess you’d have to consider course length, course elevation, and course elevation gain/loss; perhaps add to this a final consideration of geographic location (which then brings into conversation the history and culture of a particular race).

Course length is probably the biggest factor.  With the popularity of ultra distance mountain racing taking center-stage in recent years, many people would probably say the 100 miler is ideal; it’s the truest “test.”  Might be hard to argue with these 100 mile fiends when they bring-up some of the classic 100 mile ultras we’ve seen even recently on a very grand scale amongst world class competition (WS100 ’10 and ’11).  Pretty epic, as in Come, Frodo, the Urukhai have acquired our scent; me must hasten our pace across these planes, through the great mountain halls, and down for the safety of Rivendell.  The 100k and 50 miler seem solid “middle ground” distances. Who could even argue with 50k, especially if the course is mountainous, has plenty of single-track, and tests runners’ abilities to fight off bears in and amongst little or no course markings.  Course elevation:  If we’re talking mountain running, the race should take place in some mountains and the course should gain a few 1000m/ft. to make it indeed a mountain race.

Here in the U.S. we have some real classics.  Mt. Washington and Pikes Peak are, no doubt, world-class mountain races.  The only problem someone might have with that last sentence and the mentioning of those two races concerns my vague reference to Pikes Peak.  Am I talking about the ascent or the marathon?  Going with seasoned mountain running opinion, only the ascent would be in this discussion as the race is often included in the Skyrunner World Series.  Yes, I am deferring to these mountain people.  Most of those races take place in Europe, and this racing category seems typically to range from 20 to 30k distance, take place in and around the Alps and include ~7000ft. of elevation gain, some up only and some up-and-down.  Again, I’m speaking in general terms here. 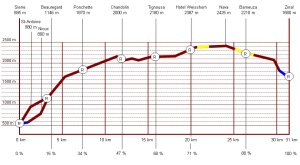 This brings us to arguably the greatest mountain race (of this category) in the world.  “Sierre-Zinal,” according to American mountain runner Rickey Gates, “is truly the Mountain Running Medium.”   The race is 31 km with 2200m ascent and 800m descent or 19miles with over 7200ft ascent and about 2500ft descent.  Sierre-Zinal began its annual organization in 1974 and has seen some incredible international “conflicts” amongst the world’s best mountain runners.  There is as much talk of the flawless direction of Jean-Claude Pont who says 550 people are involved in the organization of the Sierre-Zinal.  This year they expect about 3000 runners, 300 from abroad.

In terms of the competition, it’s the talk of mountain running.  Dave Dunham has a great overview of American success at Sierre-Zinal.  Great to see that as recently as 2009 Gates submitted a 2:38:52, which earned him a very nice 4th that year.  Peruse the results to take-in some of the more recent battles between guys like Mexico’s Ricardo Mejia (the ageless wonder), England’s Billy Burns who has managed a win and several podiums, and the great Jonathan Wyatt whose incredible CR in 2003 (2:29:12) appears nearly untouchable.

2011 Sierre-Zinal starts this Sunday, August 14.  The “tourist” race for hikers and various breeds of peasants pushes off at 5:00am.  The big boys and girls get underway at 9:00am.  The men’s battle this year seems to be focusing on the rivalry brewing between Spain’s Kilian Jornet and Italy’s Marco De Gasperi, who in 2008 actually flirted with Wyatt’s record at 2:30:50.  Czechoslovakia’s Robert Krupikca, Switzerland’s own talented Cesar Costa along with Americans Max King, Glen Randall and Joe Grey (10th last year) hopefully join the battle as runners reach Weisshorn, one of the five peaks referenced in the race’s nickname, ‘Race of the Five 4000m,’ which also seems to represent ‘go time,’ where final classification often occurs. 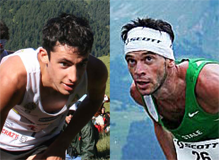 Early-on, as runners follow the mountain paths above the beautiful Val d’Anniviers, the tree-line gives way to views of five majestic 4000m peaks.  Despite the name, runners don’t actually climb the 5 peaks (Dent Blanche, Bishorn, Weisshorn, Zinalrothorn and Ober Gabelhorn), but the beauty and majesty of the views, which includes the iconic Matterhorn, are certainly indicative of this true alpine challenge.  Runners become accustomed to the interesting course markings.  Instead of kilometer markers, indicators are a percentage of the projected finish time, which is represented in the profile image above.  According to one runner, “They prove to be quite accurate, but can also be quite a discouragement.  You’ve climbed Helvellyn twice only to be told, ‘33% de temps total!’”

How do things shake-out?  On the women’s side, I’ll let Nick Clark’s suggestion resonate for the Americans: “Megan Lund (winner last year), Brandy Erholtz (third last year) and Megan Kimmel (who appears to be in very good form this year).”  This list of women entrants will certainly help us sort things out in the aftermath.  I don’t see record holder Anna Pichrtova on the list, so perhaps Lund can indeed pull-off a defense of her title.  Pardon my ethnocentric/chauvinistic limp; I go in for surgery this weekend (and you’re all welcome to join me).  On the men’s side?  Let’s hope Nick Clark

puts-in another champion’s effort and shows us all, again, what a good day’s work entails.  Similar thoughts go out to Mr. Scott Jaime and Dakota Jones, if he’s in fact running.  As for the win, if Mr. Clark comes-up short, I’ve got the Spanish and Italian duo running away, with De Gasperi taking the win.  Although Kilian has had the better between them, such as his recent win on Italian soil at the Giir di Mont, it’s De Gasperi’s turn to shine in what looks like potential rain on race day (according to my weather report  – 66F and wet).

Rain or shine it’s the second Sunday in August so that means only one thing – the Sierre-Zinal Race.  Race director Jean-Claude Pont reminds us of the race’s mottos:  “Rigueur et fantaisie” (Rigour and imagination) and “Le cœur avant le chrono” (The heart you put into the race comes before the stopwatch).  Let’s hope all competitors have plenty of heart and imagination to bask in the endurance of this rigorous beauty.  In the end, it’s Switzerland, home to miles of fantastic trail running, but Sierre-Zinal is the finest racein the Valais’ Alps and one of the finest mountain races in the world. 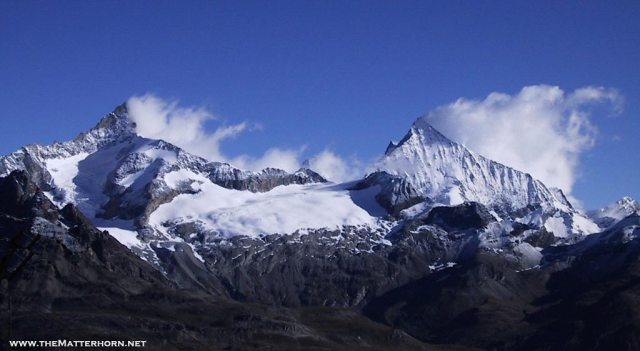